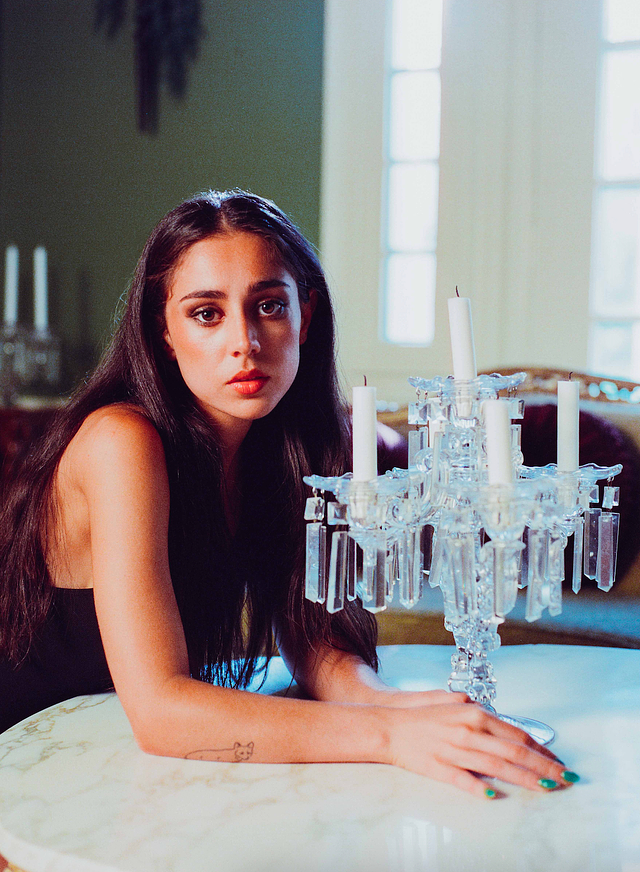 There’s a line on Honey, the latest album from Nashville-via-NYC songwriter Samia, about Aspen Grove, a collection of 40,000 trees in the plains of North America, all connected by a single expansive root system. There’s no stronger metaphor for the audience the 25-year-old empathy engine has been generating since she began releasing music seven years ago. Her songs, her fans, her friends: one enormous, interconnected ecosystem.

Honey, comprised of eleven new moments of catharsis, is by and for that organism. Set for release on January 27th 2023 via Grand Jury Music, the album was recorded at North Carolina studio Betty’s –- owned and operated by Sylvan Esso’s Nick Sandborn and Amelia Meath, frequent touring partners of Samia’s. It was produced by Caleb Wright, part of the team that helmed Samia’s breakthrough 2020 debut The Baby, and a founding member of one of Samia’s favorite bands, The Happy Children. It features some of her nearest and dearest friends: Christian Lee Hutson, Briston Maroney, Jake Luppen, Raffaella. Its songs were surreptitiously road tested for her devotees while opening for Lucy Dacus, Courtney Barnett, and more.

The end result is what Samia calls simply “a real community record.”

“We tried to be as honest as possible and keep the songs as raw as possible,” Samia said. “We talked a lot about zooming out and zooming in, giving a lot of weight to the small moments and considering them as part of a big picture, how they factor into everything else that’s happening in the world.”

It’s that approach that allows many of the album’s lyrics to feel at once specific to its writer yet eternally applicable. “I hope you marry the girl from your hometown,” Samia deadpans on the album-opener, before delivering the exasperated punchline “and I’ll fucking kill her / and I’ll fucking freak out.” Elsewhere, on the brief but beautiful “Pink Balloons,” she asks bluntly, “How are you supposed to want to love me anymore?” The album is dotted with these moments of pathos and pain from Samia’s life, stolen and stretched so they could be about a million people struggling over a million things.

While her previous work played with turning the personal into the universal, she’s breaking confident new ground here. The Baby was loose and bubbling, like wearing your mom’s big shoes while playing dress up. The knees on 2021 EP Scout were not so wobbly, and Samia began singing of gained perspective and softened edges. Honey is tight and heavy — the moment you notice you’re older now and those shoes don’t slip as much.

When writing this album, Samia wondered “How do I take responsibility for the things that I’ve done? That’s at least the stage of my life that I’m at. I need to hold the mirror up to my behavior and my role in every relationship. And that’s so much harder than just thinking that you’re the main character and dancing through life.”

So it’s no surprise that when the album chooses to dance – like on the ironic title-track, the buoyant “Amelia,” or the Rostam-produced tidal wave of “Mad At Me” – there’s an undeniable self-awareness to the brightness.

Still, it’s when she brings all of those elements together on the album-defining “Sea Lions” that the record’s confidence is fully on display. The five-plus minute song spills soft and slow, a tranquil keyboard following Samia admitting an embarassing truth for any relationship: “I don’t want to talk / I don’t really want to work it out / we’re too far gone.”  But as a sweet drum machine kicks in and one of Samia’s own voicemails fills the void — there’s community’s comforting touch again — you feel the denial melting from your chest and lose yourself under the back half of the song’s intoxicating club lights.

It’s an idea of “honey” that Samia keeps returning to. “I was drinking a lot before I started writing this record,” she said, “and a lot of the songs are about that and that’s sort of what being drunk feels like to me. Is this sort of viscous slow, thick, heavy feeling. It’s the feeling of being under this beautiful blanket of something without having to face reality,” she continues

Samia calls her music “pathologically confessional,” and though she doesn’t mind being the latest addition to the “sad girl” indie rock canon, Honey finds her less concerned with being a “sad girl” than fascinated by the things that keep us together. Memories. Friendship. Small things and big things like Aspen Grove. On this stylish and vulnerable new record, Samia holds the mirror up to herself and allows us to see ourselves in the reflection.

Also announces massive US tour kicking off in February of 2023

Loving U Thanking U Tour continues onward throughout the US

View More Samia Videos
We use cookies on our website to give you the most relevant experience by remembering your preferences and repeat visits. By clicking “Accept All”, you consent to the use of ALL the cookies. However, you may visit "Cookie Settings" to provide a controlled consent.
Cookie SettingsAccept
Manage consent