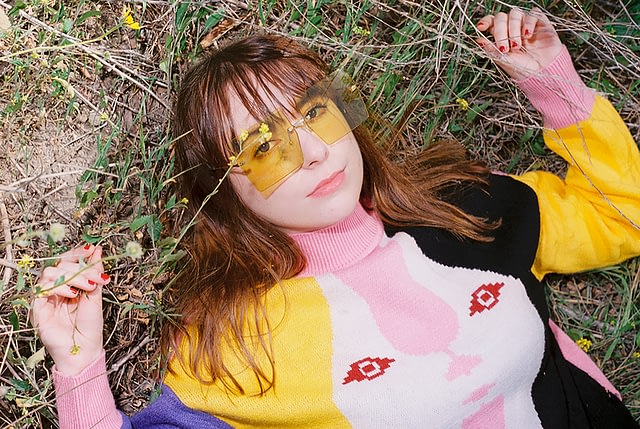 Jordana Nye can pinpoint the exact moment — the exact drumbeat, even — that changed everything.

It was the winter of 2019, and she was exploring new ideas in a Brooklyn studio. Up until that point, the 20-year-old singer-songwriter was used to working alone, and creative solitude suited her. Her organ-playing father had encouraged her to pick up the piano at a young age. She moved on to the violin at 9, and the baritone, ukulele, guitar and bass followed shortly thereafter. By the time she was a teenager, she was a one woman band. So it’s no surprise she wrote, performed and produced her 2019 debut album Classical Notions of Happiness all by herself.

The album dreamily wove warm, languid waves of electric guitar, strings and plaintive plucking with her vulnerable stream-of-consciousness lyrics. Though initially self-released, Happiness caught the eye of NY independent label Grand Jury – the home to Twin Peaks, Hippo Campus, Samia and more – who expanded and re-released the debut in early 2020. It was only a matter of time before she was catapulted her from a Kansas bedroom to the digital pages of FADER, Stereogum, Pitchfork and beyond.

Though content with Classical Notions of Happiness, Jordana felt an urge to embrace a harsher, grittier edge — less “pretty instrumentation and high-pitched vocals,” as she puts it; more opportunities to belt and throw rhythmic curveballs.

MELVV had crafted remixes for Vance Joy, Louis the Child and other artists in between his own projects and sets at the biggest festivals in the U.S., understood her vision within hours of meeting her. “I was really unsure about working with somebody else,” she says. “It was the first session I had with MELVV, and I was like, ‘I’m so scared! Is this going to work out?!’ The second session, I thought, ‘I’m gonna get more comfortable with this and figure out a way to be as creative as possible together, and make the best stuff that we want to hear.’”

The first song they completed in their initial sessions, “Crunch,” provided the roadmap for Jordana’s next chapter with its unique, 7/8 time signature and hypnotizing harmonies. It appeared as one of the three bonus tracks on the deluxe version of Classical Notions of Happiness released by Grand Jury Music on March 27, but it also laid the groundwork for Something to Say, her forthcoming EP out July 31 and her most adventurous work yet.

“I saw that I was growing; my sound was growing,” she says of her approach to Something to Say, which MELVV produced. “As soon as we finished ‘Crunch’ in the studio, we were like, ‘This was the best thing that we’ve ever made, ever, and I want to do more of it.’”

Something to Say manages to inject the adrenaline rush of “Crunch” into six songs fed by Jordana’s newfound, confident curiosity. Someone told Jordana that “Crunch” “made them feel like they wanted to rob a bank,” and she took that as a high compliment — and validation of her impulse to write full-throttle, heart-pounding choruses that would sound perfect blasting through the speakers of a getaway car.

The first single and lead-off track, “I’ll Take It Boring,” manages to fuse the lyrical might of Classical Notions with Jordana’s attraction to this pedal-to-the-metal pace. “I’ll Take It Boring” gets its “jumpy” dance beat from handclaps and driving bass, but her words offer a sharp, cheeky contrast to the energetic melody: I want to stay where it’s warm inside/I don’t think that I’m feeling alright/I didn’t want to go out tonight/So I’ll take it boring. This tension between opposites — hard and soft, loud and quiet, painfully slow and speeding out of control — is the result of the creative breakthrough that came from tweaking different textures and tones alongside MELVV. “I feel like this captures what I’ve always wanted to do with my music,” she says of the song.

“Hitman” and “Big” see further experimenting along these lines, with Jordana joining herself in multi-part harmony over a cacophony of various clashing, smashing, chiming and shaking noisemakers. “Big,” in particular, offered Jordana the chance to lean further into collaborating: she and MELVV were in the midst of recording at Brooklyn’s Studio G when the engineer, Hayden Ticehurst, invited them to mess around with the vast collection of instruments on the premises. You can hear her confidence in the material, but she states it plain in the lyrics as well: Spill my fear onto the floor/What do I feel so damn big for?/I’m self-assured now to my core/What do I feel so damn big for?

When she, MELVV and Ticehurst conjured up that brash din for “Big,” she felt empowered by the part she played in it as she held her own with her new collaborators. “I feel like they brought me out of my shell for that. It was fun recording it, too: we were in the booth just taking turns with shaking the instruments and stuff. It was great.”

That confidence takes shape in other ways on Something to Say — notably on “Far Away From You,” one of the more discordant, personal songs Jordana included on the EP. A potent kiss-off for a person from her past who she wants to keep there, “Far Away From You” is direct without flying too close to the heartache that inspired the track.

“I feel like it’s at the perfect level I want it to be, where it’s not too personal, but it’s not cheesy,” she explains. “Sometimes it’s scary to be too personal. Being vague for this EP was the right way to go, because whatever doesn’t make up for it in the lyrics definitely does in instrumentation, beat-wise, harmonies and everything.”

Something to Say marks the beginning of a new era for Jordana: the EP is the first of two that will precede her sophomore full-length, Something to Say to You, which will include tracks from both of releases along with new material later this year.

“My vision is to produce things, of course, but I just want to do different things,” she says of her musical growth. Her year began with a collaboration she never saw coming, and it’s inspired her to chase new sounds into the months ahead. “It felt scary to rerelease [Classical Notions] with three tracks that were different, but now I’m definitely getting comfortable with doing whatever the fuck I want with music. That’s my vision — making it pop.”

Summer’s Over is available everywhere now

Yes, this is real. You can see Jordana in person this Fall!

View More Jordana Videos
We use cookies on our website to give you the most relevant experience by remembering your preferences and repeat visits. By clicking “Accept All”, you consent to the use of ALL the cookies. However, you may visit "Cookie Settings" to provide a controlled consent.
Cookie SettingsAccept
Manage consent